Our work at Queens College has enacted a laboratory of recombination, taking existing campus conditions and reconfiguring them, co-evolving them in response to new programs. 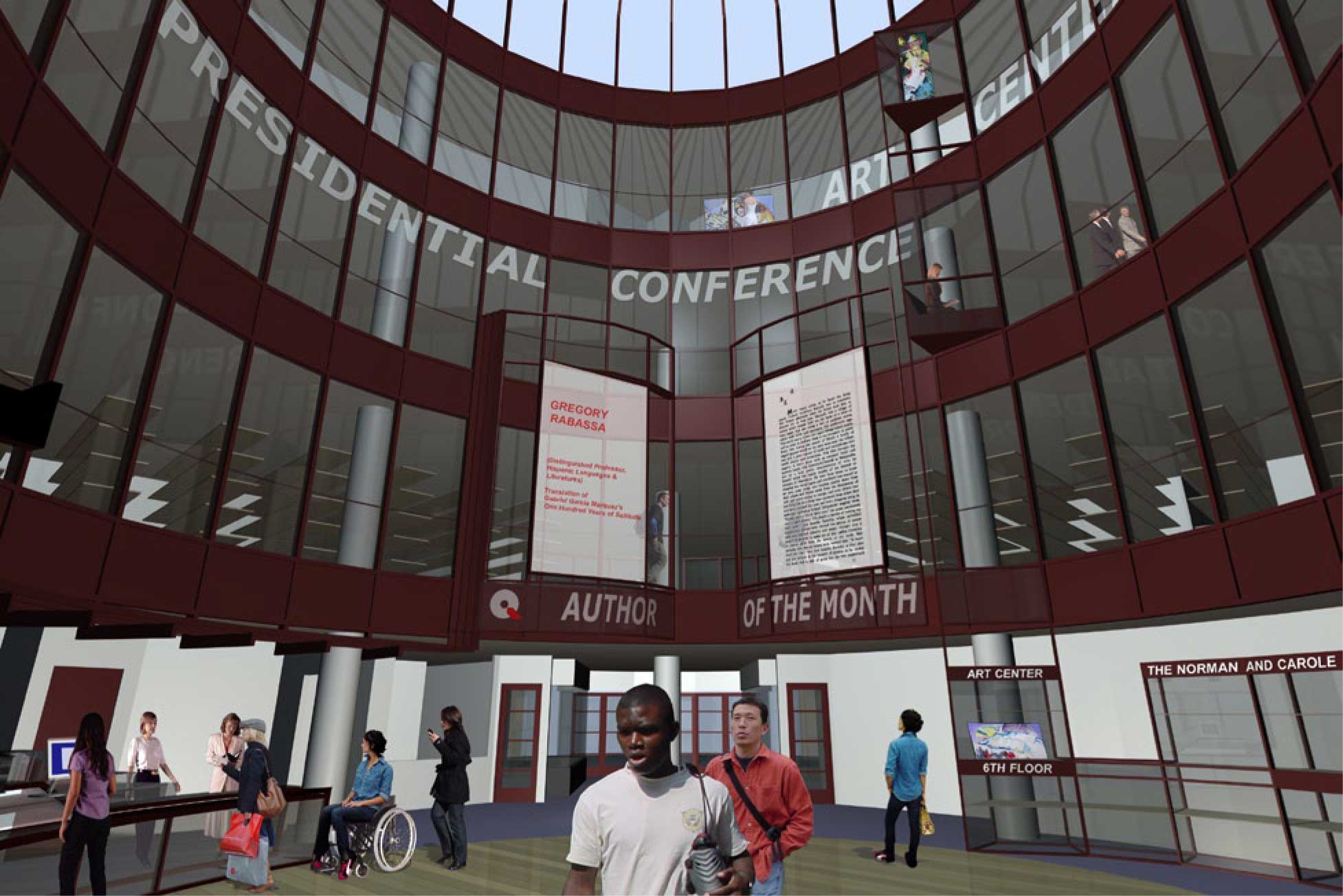 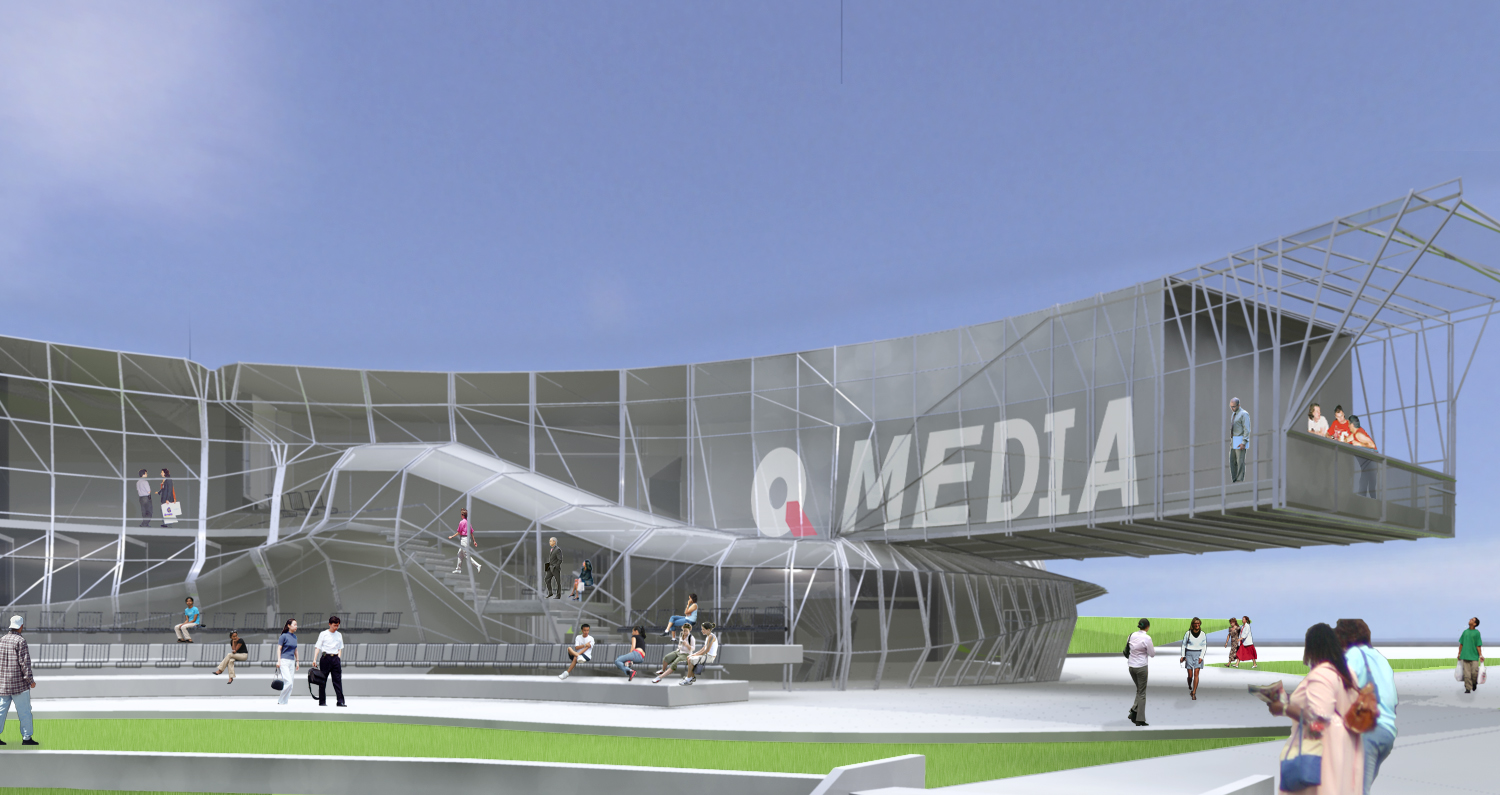 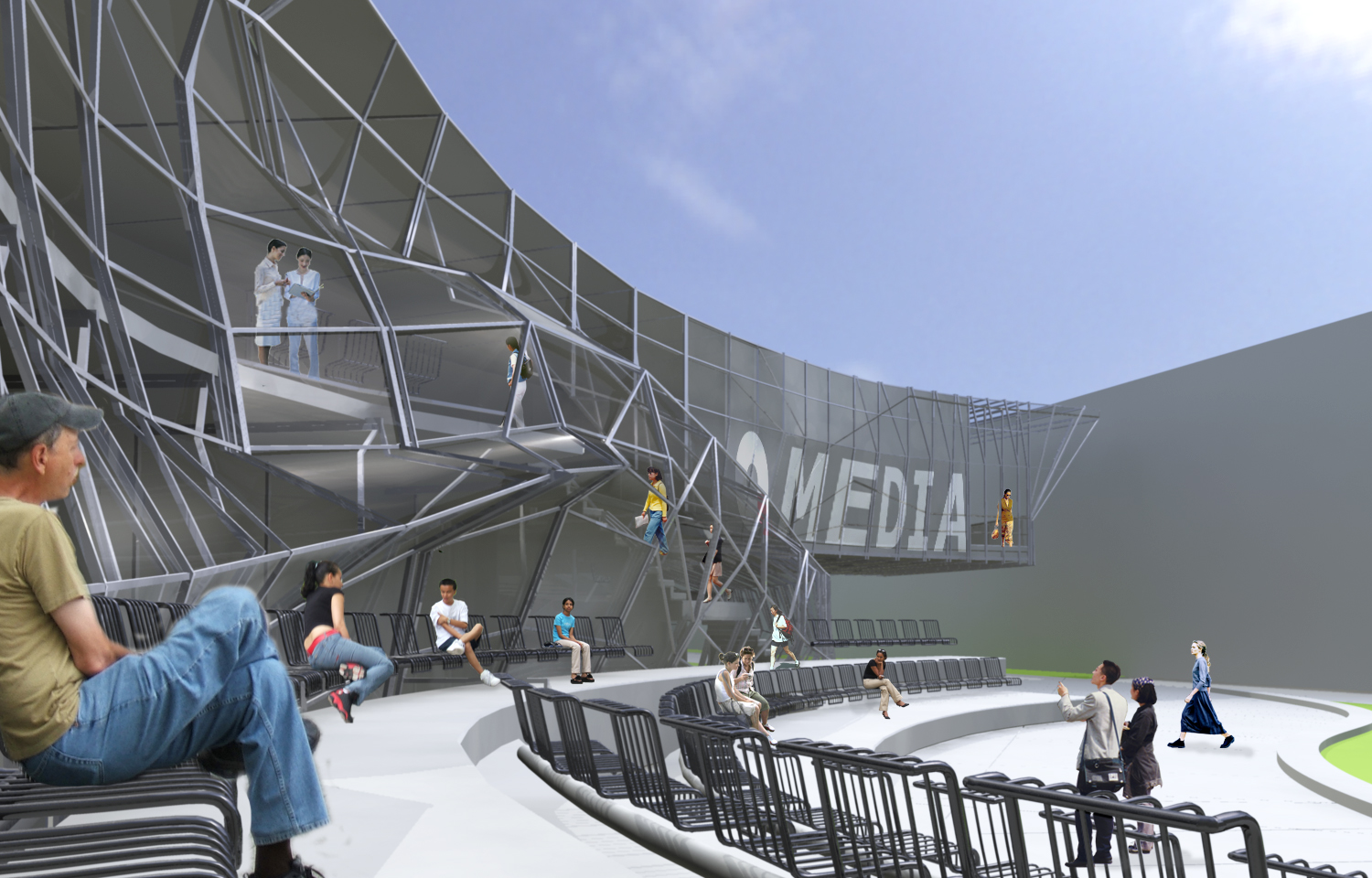 Our work at Queens College has enacted a laboratory of recombination, taking existing campus conditions and reconfiguring them, co-evolving them in response to new programs.

When a College needs to recombinate its campus, when it needs to take its architectural material and recombine it with new needs and desires and circumstances, then the existing building species need to evolve in response to these internal or external changes.

To recombinate is to take existing genetic materials and to reconfigure it with new genetic materials — to mutate it, to evolve it, to co-evolve it — in response to new environmental conditions in the academic environment: new programs, new departments, new fund-raising opportunities, new media.

New programs, new media — as in the case of our first project for the College: their Media Studies Department, given that their training studios set up in the pre-digital sixties were forty years out of date. This was not just an equipment upgrade, but a combinatory infusion of new information into the very systems of the institution, and thus an evolution in institutional and spatial identity, one emerging from the visual world of media itself.

Unlike the usual haphazard anonymity of many institutional hallways, our Media Studies Corridor provides a sense of arrival and identity, visually and virtually linking the four principal sites of media activity: the Production Studios, the existing Computer Lab, the Smart Classroom, and the Theater. The media works developed in these areas emerge into the hallway through signage and displays systems (still, video, projective, and interactive media) that present active and interactive interfaces with students and faculty, from within and without the department, as well as to the general public.

Thus the corridor is revealed as already an interface, rather than just an empty space to pass through. Is the typical school corridor dynamic and the adjoining classroom and studios static, or is the corridor such a regular flow as to be static, and the classrooms and studios dynamically filling and empting? What is enacted here is a ranging of static and dynamic recombinatory logics.

With the next project, the Open Theatre, our recombinant network begins to spread across the campus, affecting the area next to the Media Studies Department with still more multi-media, in this case a new amphitheatre for use by the Media Department, the Theater Department, and the School of Music. This collective gathering brings together departments and individuals from around the campus into what should have been the center gathering of this 1960 building complex, but is currently just an empty unused void, as each of the five buildings of the complex were designed with their backs to it.

What we recombinated here is the existing concrete overhang and institutional glazing of the 60s complex, well as the outdoor landscape wire-seating found around campus. We begin by mutating the internal structure and external covering of the existing canopy, so it can adapt and respond to the covering of the stage.

Here we invented a new structural system we call the D’arcies, after D’arcy Thompson, learning from his diagram of combinatory forces within bone. In our canopy tubular structure is uncombined and recombined, accumulated and dispersed, to provide mutual support and bracing as it gestures out from the stage and up towards the seating, So too the screening structure draws together, than expands apart, then draws together again as it reaches the stage, recombining and restructuring itself to structure the support for the stage lighting.

Revitalizing the existing atrium in the School of Music provided the circumstance to recombinate the two modes from the previous projects: the interactive display system of the Media Studies corridor and the Open Theater canopy system. Both the band-shell and the balcony canopies, by taking on the color and cadence of the existing atrium window and skylight fenestration, provide the sense of recombinating and being recombined by various characters and characteristics of the environment. A particular intensification of our display network is enacted in interactive wall of the Music Library, an active interface recombinating the multi-media activities of the Library, all of which will be brought right to and into and out from the glazing wall: the circulation desk itself, the Library’s special collections included their Renaissance and Baroque instruments (in locked cases that allow for access when needed for performance), research stations for listening and digital exploration, and the recent arrivals of books, CDs, and DVDs. The Circulation Desk continues the recombination of inside and outside as an involution of a two-dimensional plane into a three-dimensional volume of programmatic space.

Our fourth project for the College started just as a simple incorporation of a fitness center into the existing field house. But when we met with the Director of the Athletics Department, the program instantly shifted through an inadvertent slip of his when he said “I probably shouldn’t even mention this because I know it’s not in the fund-raising plans, but I’ve always dreaming of having a professional running track. We have some segments of tracks now, but the problem is the building isn’t long enough for a complete loop.” Thus we incorporated the running track and fitness center by de-incorporating what is already in-corporated inside, pulling what is inside to the outside of the building.

The running track emerges out from and return into the existing gym, the track structure suspended outward to establish a new entry to the fitness center situated in the front of the building on the ground floor. The live runners will be accompanied by images of a running runner, screened onto the glazing, from the first motion study of running by pioneering scientist Etienne-Jules Marey. This static and dynamic motion will be visible in relation to, in combination with, the dynamic motion of people on the stationary exercise equipment in the fitness center under the running track.

The play of convex and concave that emerged first in the Open Theatre, developed in the School of Music, evolved in the Gym, now mutates again in our fifth project for the main Library on campus, the new and the old media recombinating with the new and the old structure. While there are various exhibition and presentation spaces proximate to the existing Library rotunda, they are unconnected to each other: the Norman and Carole Barham Display Cases on the main (3rd floor) level, the Art Center on the top (6th) floor, and the Presidential Conference area on the 5th floor. These programs and spaces are peripherally visible to each other at best, invisible at worst. Here our display system connects and relates these various activities to draw forth, in a visual and spatially way, the interactions of the various programmatic life within the Library.

The Q Book emerges into the rotunda, pages writ large, celebrating the authors of Queens College, past and present, faculty and alumni. The Queens College Author of the Month will digitally project pages of the College’s authors to all the various levels of the Library. The Q Book is connected not only to the shelves, but back to the Circulation Desk, as the left side of the Book, like the edging of pages, spread out and down and turn to become a trellis over the Desk, engaging you from the one to the other.

Our sixth project, the Media Arts Center, takes the place formally occupied by Gertz Hall within the original Colden complex. The benefit of the original plan of the complex, designed in 1960, was its radial distribution of five different buildings around a central open space. Its drawback was that this open space was the backside of all five buildings and remained removed and empty of use and life, while the orientation of the five buildings made no reference to the neighboring buildings and the existing campus plan. The Media Center enacts a dynamic positioning, addressing the radial arrangement of the existing arts complex and our proposed Open Theater while simultaneously inflecting the lower level auditorium out towards the neighboring building that houses the media faculty offices. This opening out draws together the public open space of the upper Campus Plaza and the lower Open Theatre. While the outdoor seating of the Open Theater inflects inward to the lobby, the stair in turn inflects outward as it rises up to the Media Production Studios on the second floor, situating exchanges between individuals and uses, inside and out — the middle terrace incorporating into the lobby space, first as a refreshment counter and then extending as the stairs.