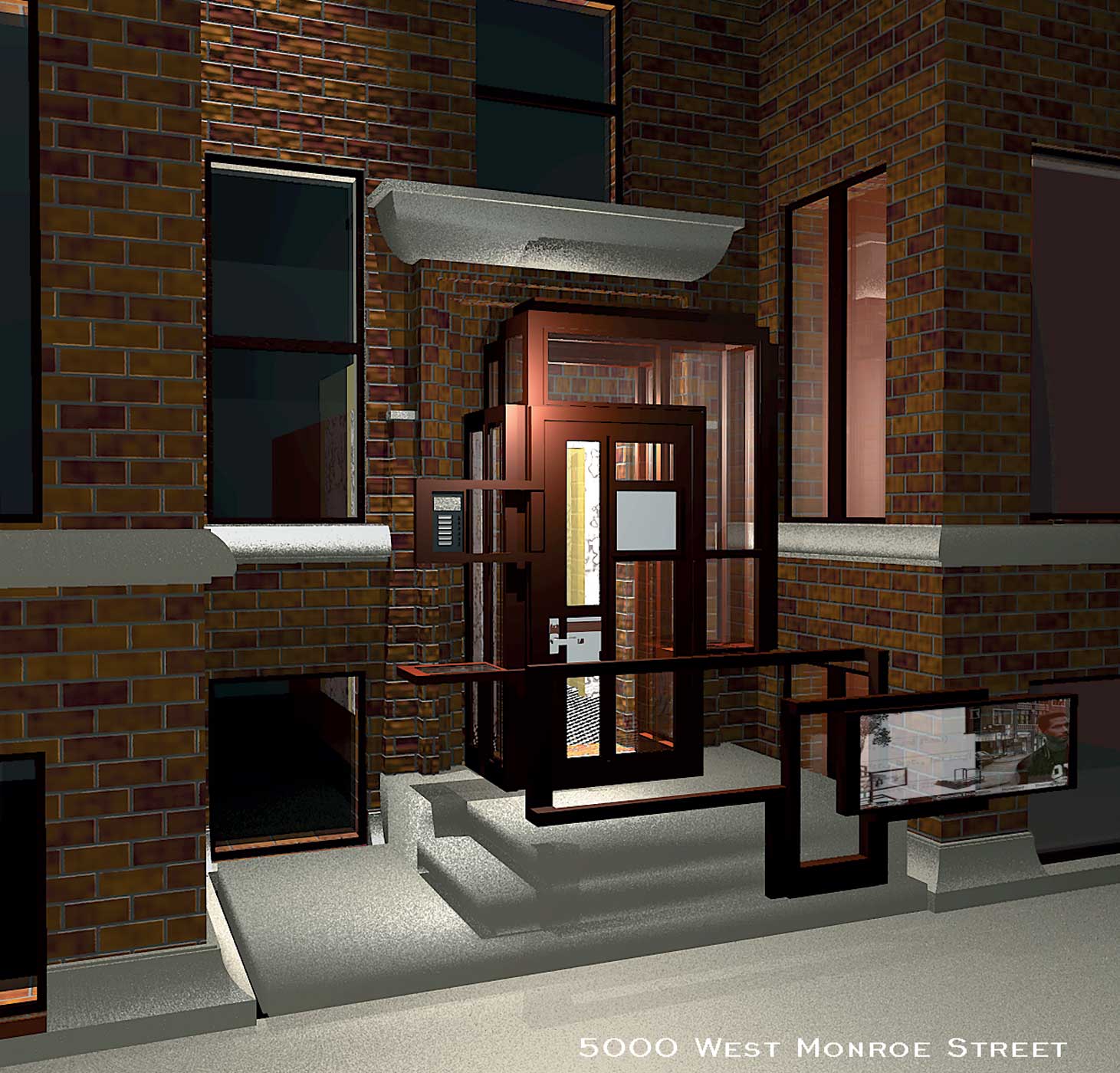 Architectural and graphic and landscape elements as actors in the social and psychological engagements of urban life. 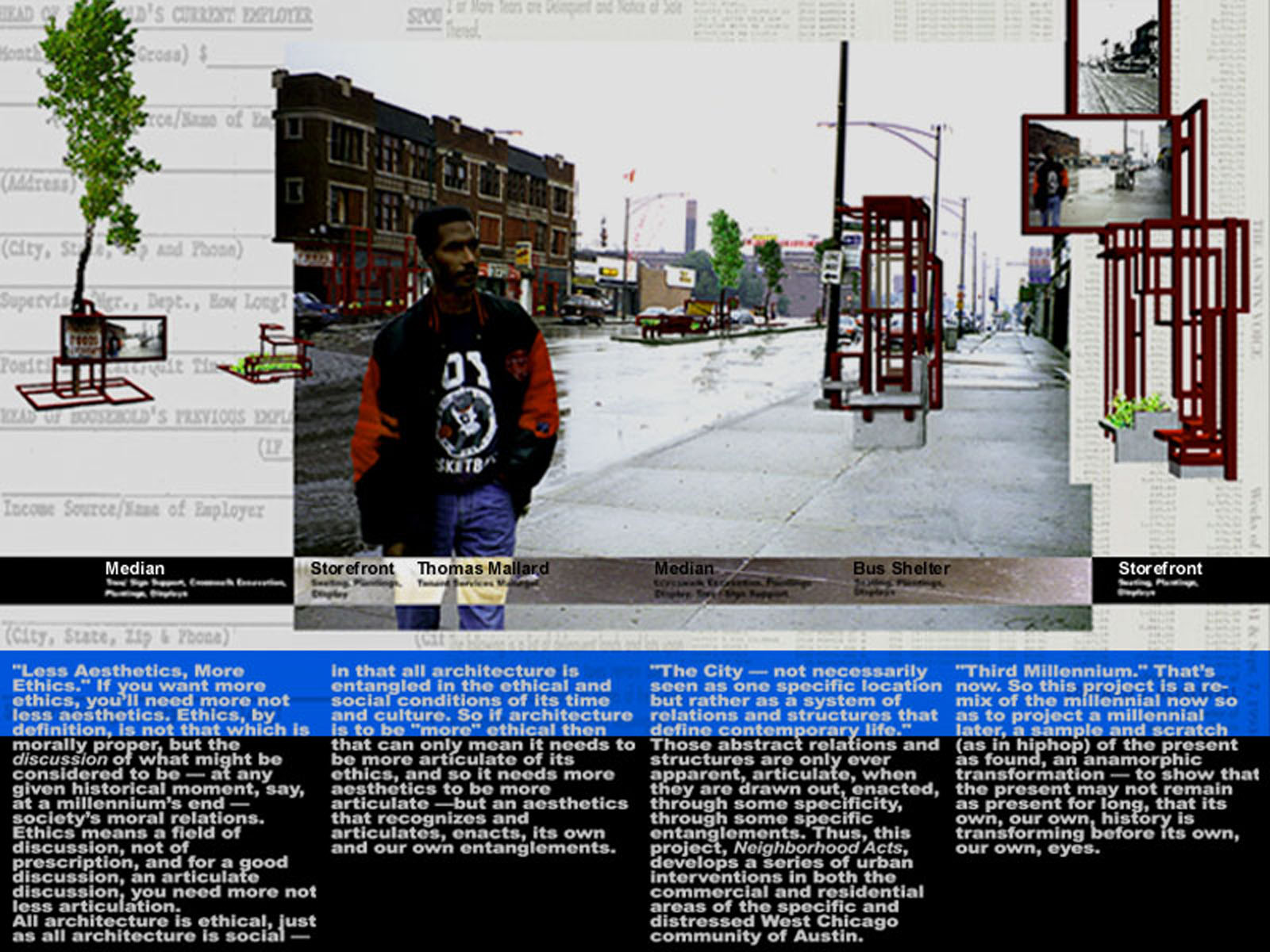 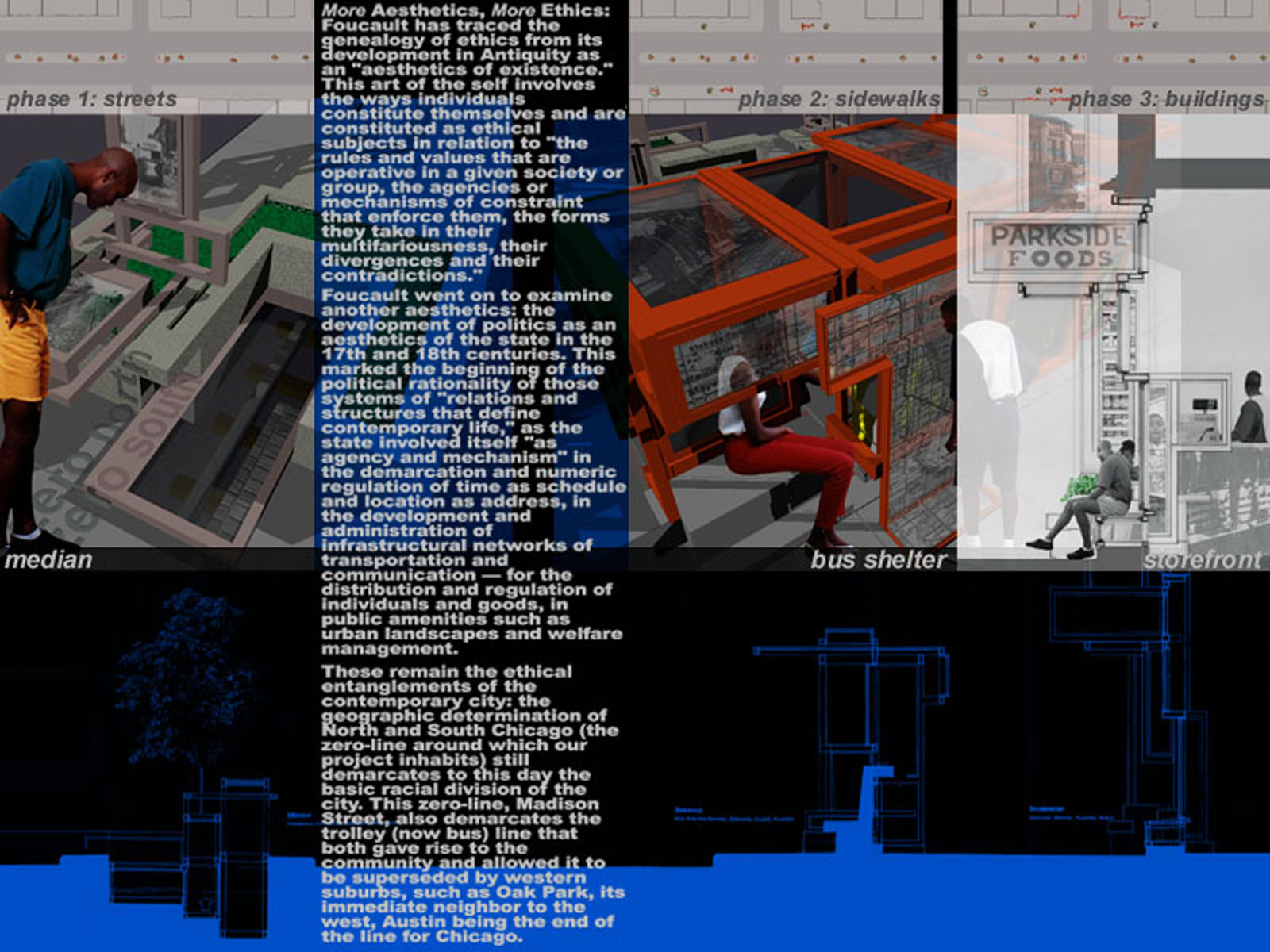 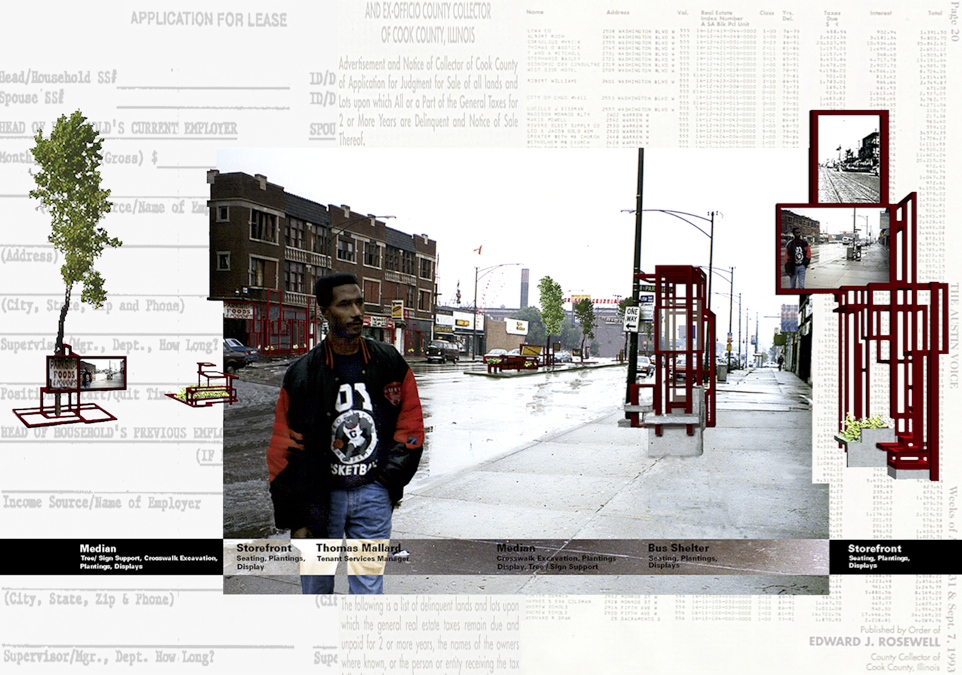 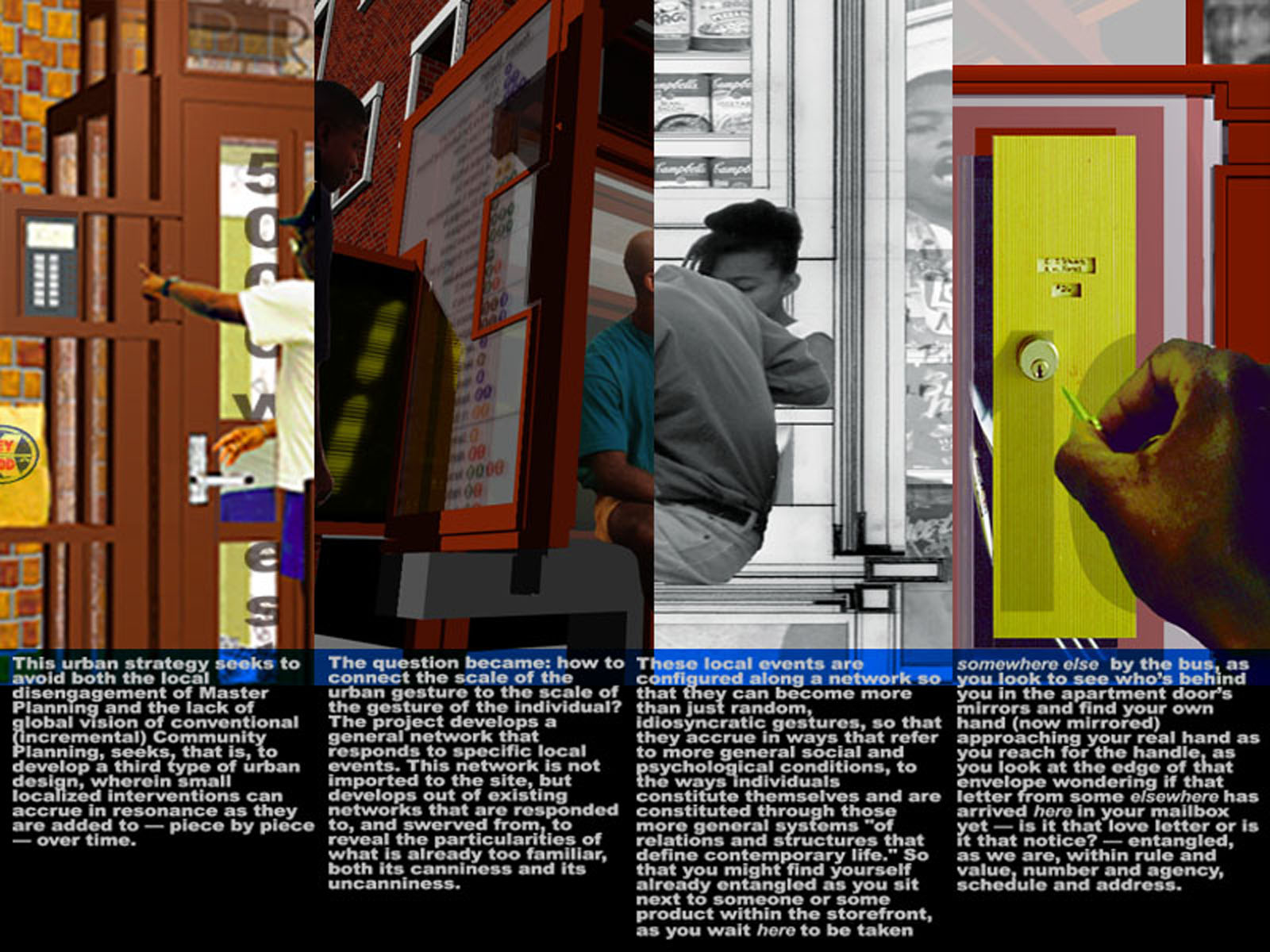 We were asked by a local community group to engage the depressed Chicago community of Austin. The project focuses on the social and psychological associations of landscapes, sidewalks, medians, entryways, storefronts, bus shelters, and lobbies. It is crucial to consider these thresholds not as separate but as linked conditions from the exterior environment to the interior environment. All of these places are rich in everyday meaning, and our attempt is to bring forth that meaning in ways that people might begin to feel engaged with, and a part of, their environment. These interlinkages are used to draw forth the urban interlinkages of public and private, community and self, outside and inside, nature and culture, biological time and historical time.

We created a series of networks that respond to specific neighborhood acts, by revealing that architectural and graphic and landscape elements are actors in the social and psychological drama of urban life. These networks are not predetermined and imported to the site, but develop out of existing networks (framing systems, landscapes, concrete paving systems as found in storefronts, doorways, signage, streetscapes, bus shelters), responded to in ways that reveal what is meaningful in the already familiar. The new networks develop in a more engaged and flexible manner, interlinking with one another as they gesture to events of everyday life by drawing up or down from the sidewalk plane, in or out from the wall plane.

In the commercial area of Madison Street further link interlinkages and encasements of community signage, seating, landscape, and historical excavations have been developed in the medians, sidewalks, and storefronts. In the median we focused on the crosswalks, developing a series of display cases for historical material, some just above or below the handrail, some emerging from the ground encasing various layers of historical site excavations. This historical excavation of the original trolley line marks the geographic determination of North and South Chicago (the zero-line around which our project inhabits), which still demarcates to this day the basic racial division of the city. This zero-line, Madison Street, demarcates the trolley (now bus) line that both gave rise to the community and allowed it to be superseded by western suburbs, such as Oak Park, its immediate neighbor to the west, Austin being the end of the line for Chicago.

In the bus shelter, a particular focus has been placed on how displays (in the armrest or in the seat or the walls) might engage the communicative entanglement of two fellow travelers waiting to travel. Similarly the new storefront is no longer an uninhabitable two-dimensional barrier between inside and outside, private and public, consumer and product, but takes on the thickness that is already its condition as threshold, as the window wall system is transformed into seats and display cases, while the sidewalk transforms itself into other seats, planters, and shelves.

In the residential area, street landscape develop further these interactions of gathering and display and exchange by the entrances of the buildings. The frames and volumes of the entrance doorway is reconfigured in response to apartment buzzers, security mirrors, shelves to place your package when you arrive home. The new lobby areas will be a reframing of the existing mailboxes, with the addition of bulletin boards, package shelves, seating, display cases, indicating how these various social and psychological events and representations are enfolded. Conventional mail boxes doors will be re-situated within an acrylic sheet sanded to be translucent except for slight transparent reveals near the doors, just enough to see the edges of the envelopes without being able to read them, underscoring the complex of desires that circulate around the mail and its representation. The metal stops — which hold the glass panes, and thus hold the photographs, in the frame — extend beyond the frame to develop their own framing of other community events.

The inadequacy of urban design planning for low-income neighborhoods is unfortunately readily apparent. On the one hand, grand-scale master planning is often disconnected from the small-scale realities of a neighborhood. On the other hand, incremental development by local community groups, while establishing individual buildings or sites of quality, often fails to provide a more global vision that might link a neighborhood. We are proposing a third type of planning, one that could start from the local singular circumstances, but through a process of incremental and transformative development could provide a vision for the physical and social form of the community.

Starting from these specific architectural interventions we attempted to develop a new form of urban intervention, one attuned to the restrictive condition of current urban development, one that begins from the local circumstances but through a process of incremental and transformative development provides for a rethinking of the physical and social form of the community. Thus small-scale (in other words, economical) interventions can accrue in resonance as they are added to — piece by piece — over time.